A Brief History of Hurricanes in Hawaii 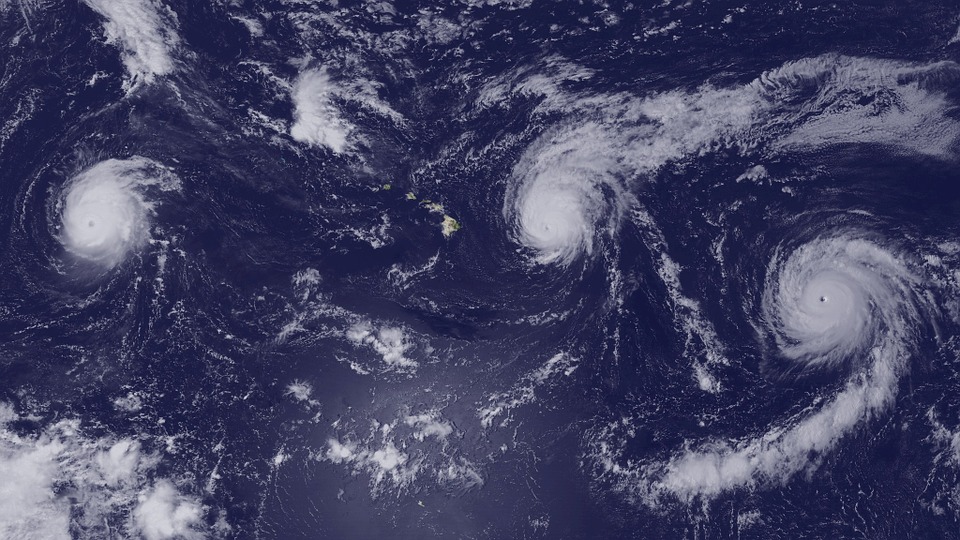 Just by taking a look at the last 60 years of weather history in the Hawaiian islands its easy to see that a hurricane hitting the islands directly is an extremely seldom occurrence. One of the main reasons hurricanes are rarer in this part of the Pacific is because water temperatures are cooler. Hurricanes need warm water and moist air to fuel their growth, which is why you can see a consistent pattern of hurricanes forming off of the coast of California and then breaking apart as they head west before they come anywhere close to the islands. The second significant reason hurricanes can’t maintain their strength is because of strong trade winds pushing storms away from the islands.
The breezes that make our island climate so pleasant are the same wind patterns that protect us from most hurricanes. But even with these significant advantages the Hawaiian Islands have not completely escaped extreme weather over the years. Some of the most notable storms were Iniki in 1992, Iwa in 1982 and Dot in 1959.


Hurricane Iniki:
If you speak with any local living in Hawaii during this 1992 storm, they will most likely tell you it was one of the most devastating storms to ever hit Kauai. When the storm made landfall the winds were recorded at 145 mph. The storm destroyed over 1,300 homes and caused widespread panic across the islands.

Hurricane Iwa:
This storm formed in the last weeks of the 1982 hurricane season and hit the islands of Kauai, Niihau, and Oahu. The damage was extremely costly and all three islands were actually considered disaster areas by then president Ronald Reagan.

Hurricane Dot:
1959’s Dot is the oldest storm in this list but certainly not the first storm the island chain has survived. Kauai was mainly affected by Dot and saw winds as high as 103 mph and massive amounts of flooding across the island. This storm was rare because it was one of the few storms to form in the warm waters adjacent to Baja California and continue to follow a western track while maintaining close to full strength as a Category 4.

You may have noticed that Maui is not included in any of the storm descriptions mentioned above. While Maui can see significant rain and wind from tropical storms and hurricanes it is extremely well protected thanks to it’s position in the island chain. Maui is surrounded by the Big Island, Kahoolawe, Lanai, and Molokai which means that the likelihood of a hurricane making landfall on Maui is extremely small. While 2018’s Hurricane Lane did create some panic in Maui, the storm was broken up by trade winds and reduced to a tropical storm before making landfall.

If you are curious about the real estate market on Maui or would like to see a property the next time you are here contact the Smith Team today! We know the island very well, and would be happy to answer any questions you may have.